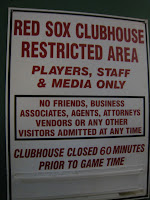 Recently, I've done a few things that may seem a tad “reckless” for me, relatively speaking. I changed the name on my Facebook profile to my real name. This really wasn't a big deal when I did it because the only people that I had as “friends” on Facebook were people that I had known for eons - there was seriously not a “friend” on Facebook that I hadn't known for at least 15 years (and that's because they're only 15 years old.) The picture that I had for my Facebook profile photo wasn't obviously me either: It was taken from afar and I'm wearing dark sunglasses (I'm also standing in front of the Facebook offices on University Street, but that's another story.) I also tweaked my Facebook privacy settings in such a way that I am not searchable under my real name by anyone - not even by other Facebook members. This tweak in the settings puts the onus on me to go out and invite other people to be my friend, as they would really have no way of finding me. I can definitely live with that.

I also started up a Twitter account as Hooeyspewer in late August just to see what that site was all about. (Truth be told, I did it so I could give my husband a data dump on the site from a user perspective - but that's another story as well.) What I found was a really great group of people on that site from all over the world that interact with one another throughout the day in small messages of less than 140 characters each (a.k.a. “Tweets”.) I'm totally sold - it's great. It's been a study in being succinct - which anyone who consistently reads this blog knows, is not a strong point of mine. I found many of the people I follow to be very engaging and interesting. In the last month, I have grown an appreciation for many of the people on Twitter. I've had longer conversations off of Twitter with some via IM/email, and it really bothered me that these people that let me into small slices of their lives through Twitter (and more recently through the 10 for 30 Challenge on Flickr) only knew me as Hooeyspewer. It really just seemed awkward, in a way. As I mentioned in an earlier post, I have had real reservations about letting many people know who the person behind Hooeyspewer is in real life. Recently, I've decided that it wouldn't be so bad to let a few people know.

I figured it wouldn't hurt to let some of the people with whom I swap Tweets and photos know what my real name is. What would really be the harm in inviting some folks from Twitter to be friends on Facebook as well? I doubt highly that any of them care whether my name is Andorra Steele or Mary Poppins. I really like these people and would really like to become their friend. How would that even be possible if I couldn't divulge my name? That just seems nutty to me. Truly, there isn't much of a difference between meeting people on the Internet in this way and meeting them at the gym. In a way, it's actually “safer” as you would naturally divulge your name almost immediately to someone you become acquainted with in person, whereas, I am divulging this information to people with whom I have been acquainted for at least a month already. I really like these people. I've read their blogs. I've seen their photos. I know what hobbies they have. I have enjoyed their company greatly.

I have been overly guarded for the last decade because of the stalker incident that I had in my past. The offender in this case wasn't just stalking me, he was armed and meant serious harm to me. The judge was all too happy to grant me the maximum duration for a restraining order as allowed by the law. Many people can operate on the Internet as themselves without much worry of physical harm resulting. I, unfortunately, am not one of them. I have basically been “hiding” for a little over a decade as I have a known threat that is still walking the planet who could wake up one day and decide once again that I ruined his life because I rejected him. (The first time he woke up and decided this, I hadn't seen him in well over a year.)

I have used the name “Hooeyspewer” as a shield for a long time. I am grateful that I have been able to operate online without many problems under this name. I threw up walls between the real me and the outside world to protect me from the threats that I know lurk out there. I didn't build the walls to keep good people out and keep me inside. All of the same barriers are still there. I am still just an anonymous face to the general public. I am happily choosing to not be anonymous to some people who I appreciate and who have shared part of themselves with me. I am just choosing to trust some people and let them through.
Posted by Hooeyspewer at 11:36 AM 6 comments: