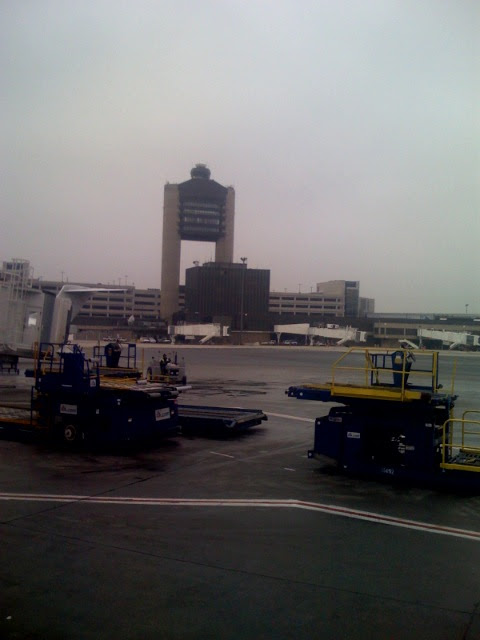 This year, in addition to the several things for which I am thankful, I get to add a safe and easy trip from our home in Massachusetts to my mother's house in Chicago for my husband, our dog and me. News and weather reports would have had you think that the Wednesday before Thanksgiving was going to be a fiasco, but as it turned out, for us, it was smooth sailing all the way.

We did allow ourselves extra time as holiday travels in the past for us have been difficult. In addition, we were traveling with our dog, Sam, in the airplane cabin with us. When you travel with your pet, you are not able to check in electronically at the airport or over the Internet. You physically have to stand in line so the ticket agents can see that your pet is healthy and within the airline's size guidelines. You also have to pay the airline the related fee to bring your pet onboard with you. (In our case, it costs us $80 each way to bring Sam on any domestic flight in the contiguous U.S. on American Airlines.)

When we arrived at Boston's Logan Airport on Wednesday morning, there were either very short lines or no lines at all greeting us. We were the only people standing in the status line (Gold, Platinum, Executive Platinum, Business, First). The regular coach line consisted of 5 people waiting. The ticket agent said that the flights were all pretty full - over 90% in most cases - but that the lines hadn't been bad at all. The security line was a breeze as well - even with the dog in tow. There was a longer line at the airport McDonald's for breakfast than there was for security. Everyone was in a really good mood as well. Even though Sam was on her travel drug of choice (acepromazine) she was still into meeting and greeting the various people working to get us to Chicago yesterday.

We fly a lot and we usually fly American Airlines. Not a month goes by that one or both of us does not have to go through Boston's Logan International Airport. That being said, our experience yesterday has to rank near the very top of the pre-flight experiences at that airport for either of us. Certainly for travels with Sam, it may very well have been the best pre-flight she's ever had.

In addition, we had a great flight. We had an on-time departure - a real one. After the leaving the gate, we didn't go and park on the tarmac somewhere for a while. We taxied to the runway and were 2nd in line for take-off. We actually landed 11 minutes early. The pilot had been thinking we were going to land 20 minutes early, but there were more planes in the queue at Chicago's O'Hare than he'd thought. I certainly wasn't disappointed.

So I am thankful to all of the people that made sure that we and many other people like us had a safe and good travel experience yesterday. I wish all Americans everywhere a wonderful Thanksgiving holiday!
Posted by Hooeyspewer at 9:42 AM