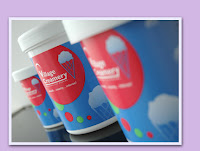 One of my favorite ice cream shops in the Chicago area is the Village Creamery in Niles, IL on the corner of Oakton and Waukegan. I love this place because the ice cream is made freshly on the premises and they carry some of the most wonderfully exotic ice cream flavors around. Coconut, Banana, Coco-Pina, Avocado, Mangosteen, Jackfruit, Jasmine Lychee - the list goes on and on. I highly recommend a stop here for some ice cream if you're in the area.

The owners of this ice cream establishment have a Philippine heritage. In the Philippines, all school courses are taught in English. They also speak a language called Tagalog, as well as several Filipino dialects and Spanish. My grandmother spoke Spanish in her home growing up, Tagalog in the shops to the shopkeepers and English in school. Most people from the Philippines have very good English skills - but they seem to have a very distinctive accent when they speak it. (If you've ever seen the HappySlip videos on YouTube, you will have heard her take on the accent.)

Well, my mother went into the Village Creamery to pick up a quart of Banana ice cream. I love their banana ice cream. When my mother opened the quart at home, I didn't think it looked right. Sure enough, they gave her a quart of Vanilla ice cream. I had to laugh. My mother's accent isn't very bad - she actually took speech courses in the 70's to get rid of it - but she still has a bit of one. It seems to reappear when she is speaking to another Filipino person. When she asked for Banana she probably asked for “Bah-nah-nah” - and the person taking her order heard Vanilla - “Bah-nee-lah.” What's amusing is that if she had ordered in Tagalog, we may have been eating Banana ice cream instead.

So we had Vanilla. Makes me a little sad. Though it's a great excuse to go back again!

And here's one of the HappySlip vids for your enjoyment. I have actually met people with accents as strong as these - but not all folks from the Philippines have severe accents.

Ice Cream photo via www.villagecreamery.com
Posted by Hooeyspewer at 1:36 AM