Last Tuesday, I found myself at Massachusetts General Hospital for a scheduled liver biopsy. As I've mentioned previously, there is a possibility that I have autoimmune hepatitis. My doctors aren't sure what has been causing my liver to be in distress - on and off over the last five years. As a result, I've been subject to quarterly blood tests and a biopsy at least every five years. Well, my last biopsy was five years ago when this problem was first detected. The time had come - and I was ready for it - or so I thought. 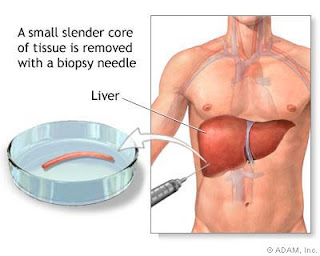 My first biopsy was performed by the same group within the hospital and it went very well. After a liver biopsy, they recommend that you take it easy for a couple of days and avoid lifting anything heavy. As the liver processes a lot of blood there is a risk of internal bleeding. In addition, you're going to be tender to sore. In the case of my first biopsy, I felt no discomfort at all after the procedure. I felt like I could have gone to the gym and worked out without a problem. I didn't do that, of course. I took it easy for a couple of days, but I didn't feel like it was really that necessary. I couldn't even see where the incision was made in my side. It was as if the biopsy never even happened. I just took a short nap on a table surrounded by doctors and nurses at the hospital and nothing happened. It was easy and relatively painless. Nothing to fear there.

This time was a little different. I was in pain right after the procedure and as I lay on the stretcher in the recovery room, it hurt every time I inhaled. There was pain in my right lower back and in the area of my oblique muscle on my right side. I stayed in recovery for three hours and was convinced that I just had muscle pain. I spoke with one of the doctors that performed the procedure and he felt that my pain was normal considering what had been done. He explained that they went between my ribs, so they expected some soreness, but I'd be fine in a day or two. My husband drove me home and I seriously spent the rest of that day and the next on the big comfy chair in our reading room with the dog. I was definitely sore.

I woke up Thursday in pain again and was so concerned that my experience was so totally different from my last biopsy that I called the hospital to discuss the situation. It hurt to inhale. I had a big dark bruise at the incision site and the pain was in my back and side even though my incision was closer to my front. I was fortunate and was able to speak with the doctor who performed the biopsy. He asked me to come to the hospital immediately to have a CT scan to make sure there was no internal bleeding. He said that in young patients who are in good shape, sometimes internal bleeding can go on slowly for days without severe discomfort. I went in for the CT scan and the doctors who reviewed my scan assured me that I had no internal bleeding.

So why the pain? As they went between my ribs, soreness in my side is expected. Another doctor also suggested that if they nicked my diaphragm at all, I would definitely be feeling it for a few days. They explained that sometimes the pain is felt in places far from the site of the injury as the pain signal travels through the nerves. The other difference that I noted was that even though I was under “conscious sedation” both times I had this procedure, I fell asleep completely the first time. Last Tuesday, I wasn't asleep for most of the procedure though I know I was asleep for the gruesome stuff. I was awake while the doctor tried to determine where to cut me and what path to take for the biopsy. I remember him tapping a plastic tab into my side to mark the incision point. He was jabbing it into my side pretty roughly, so I'm not too surprised that I hurt where I hurt (I'm just surprised at how much it hurts and how long it lasted.) I wonder if I tensed a muscle when I shouldn't have. Oh well. At least whatever it was wasn't going to kill me or put me in the hospital.

I've had pain every day for five days - and today, I can still feel what remains of the soreness. So much for two days of rest before I'm ready to go. I think next time I have to do this, I'll try to fall asleep.
Posted by Hooeyspewer at 6:59 PM

I had no idea...That is why you weren't feeling well, hard to rest, etc. My husband had to have two liver biopsies and he had a horrible time with them (even though he would never let one) but he was awake or both of them as the doctors had told him that they needed him to breathe a certain way to get the diaphragm out of the way. Perhaps they went in at a different location for him than they did for you.

I am so sorry you are still in pain. Hopefully they can figure out what is wrong and begin to fix it.

Hi. We don't know each other but just found your blog. I had a liver biopsy 2 days (Tuesday) ago. It was the most horrific experience - not even words to describe it. I was totally awake and alert for the entire thing. Once I heard the pop of the needle, my whole ride side cramped and went up to my shoulder. I hurt so bad I could not breathe, just as you state. I had 3 dosages of morphine and 2 5mg of oxycodone before I could 'rest' and breathe a little easier. I spent 2 hours in the post-op room which is not common for a liver biopsy. They had no idea what was wrong or why the meds they were giving me were not working. It was absolutely horrible and I pray I never have to go through it again. I am still very sore today but at least as long as I don't move my level of discomfort is not too terribly bad. I hope you are well at this point!!! God Bless:-)

Wow, Tress, they really put you through it on Tuesday. I am so sorry to hear you have had such a horrible experience. I really hope that the pain passes soon. I also do hope that your doctors are sure you are not experiencing any internal bleeding.

There are so many things the docs could have nicked - nerves, bile ducts, diaphragm - it's a wonder more people don't need more than a couple of days to recover. I am grateful that my first liver biopsy wasn't like this last one.

I hope you feel better soon and that you don't have to have another one of them in the future. Take care.