While browsing a list of ice cream flavors to consider for a birthday ice cream cake for my husband, I stumbled across a flavor called "Queso." Cheese ice cream? The description was basically Vanilla ice cream with "Kraft cheese pieces." As odd as that sounded I was strangely curious as to what a cheese ice cream might look and taste like. They were consistently making this flavor, so one would think that they were consistently selling this flavor. The ice cream shop that sells it is one of my favorites in Chicago and has some of the tastiest exotic ice cream flavors in town. I tweeted about the existence of Queso ice cream and it seems the consensus of the folks that tweeted back to me was that the idea sounded repulsive. Different strokes for different folks! There's someone out there who must really like this, so I was willing to try it and thought that I'd share my first encounter with Queso ice cream with you.

I apologize for not posting this information sooner. Several people have inquired as to the results from the biopsy that I had in January, so I thought I should post a short update on the matter.

After my biopsy, I received no phone calls or any other communication from the doctors for over two weeks. At that point, I called their offices and left a message with their assistant who assured me she would let them know I had called. She thought that my test results were definitely already in and that the specialist would call me that afternoon. Well, that was a Friday and nobody called. So I waited until Monday and called again. The assistant was surprised nobody called me on Friday because my results were definitely in their possession. She said she would page the doctor and have him call me immediately. Well, "immediately" was more like in three hours, but he did call me.

The bottom line was that they did not see any evidence of any further damage to my liver that would have occurred over the last five years (since my last biopsy). That's really good news. The only bad news is that they still can't diagnose me - but that the doctors are very confident that the only reason for what is happening with my enzyme levels is autoimmune hepatitis. So, we just keep watching my enzyme levels and re-do a biopsy when they feel it is necessary (hopefully it'll be longer than 5 years from now - but somehow, I doubt it.)

Then the doc said he'd call me back to discuss our plan for monitoring the situation. He couldn't go over it then because he had another appointment to meet. This was fine with me as I really wasn't in the mood to discuss the matter anyway. Well, it's been more than a couple of weeks since he said he'd call back. I'm thinking his assistant is due for another phone call from me.

No worries! I still think there's a chance that this is all a load of garbage and I just have weird enzymes. Granted, there isn't much of a chance of that being the case -- but nobody's said that there's absolutely no chance of that yet.
Posted by Hooeyspewer at 8:25 PM 3 comments:

Replies.
Posted by Hooeyspewer at 9:50 AM 4 comments: 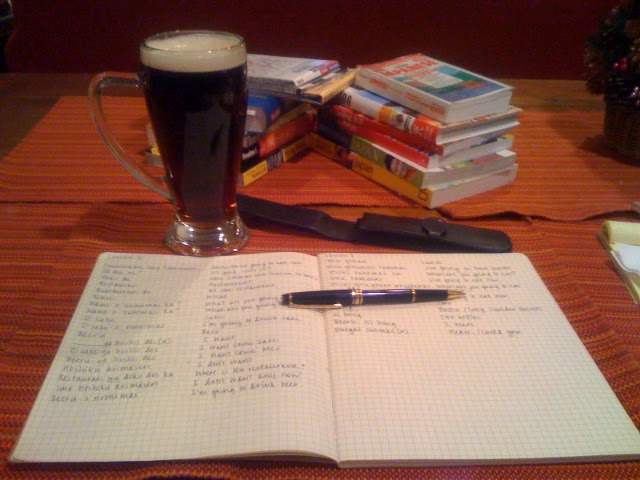 Well, it's already February and it dawned on me that I have less than a month to get my Japanese and Chinese language skills up to a level at which I feel comfortable roaming those countries alone. My husband is going to Asia for business and, as is common for us, I am tagging along. When he is working, I explore the area alone or meet up with friends. When he is not working and on weekends, we run around together, and if English isn't the official language of the land, he looks to me to speak for him to the locals - he does this on our vacations as well (he usually has a translator with him when he is working). It's not a bad gig for me, really, and I enjoy it quite a bit. I'm just getting a little lost at the moment because our next trip involves Japan, China and Hong Kong and I'm not exactly proficient at any of the Asian languages.

To be fair, I did learn a bit of conversational Japanese in 2006 for a few weeks in Tokyo and Kyoto. What little Japanese I learned was enough to successfully navigate the cities and speak with shop clerks, drivers and waiters without much problem. After the first week in Japan, we found out from a colleague living in Tokyo that the vast majority of spouses who accompany their spouse to Japan from the U.S. request personal guides. Personally, that isn't my idea of fun.

I find that it's worth the time (if you have it) and effort to try to get a little bit of the local language under your belt and go it alone with your own list of what you want to see and experience. You definitely need to keep personal safety in mind, as there are a lot of places where it is not advisable to roam alone - but when you're visiting a relatively safe place, it's fun to go it alone. Some people are into tours and groups and personal guides - I'm just not one of them. I really love running around foreign cities and visiting their interesting sites but also being able to duck into little cafes, pubs and shops whenever I feel the urge. So far, I've been fortunate to find very polite local people who appreciate my attempts at speaking with them in their language. I've also been able to see what I've wanted to see and not what somebody else thought I should see and I've done it on my own schedule.

So - here I sit on a Saturday afternoon trying to refresh my conversational Japanese with a Pimsleur audio CD, a phrase book and a Black and Tan. (I'm not sure that the beer is helping the process, but it doesn't seem to be hurting it yet). I think I can get reacquainted with enough of this language by Tuesday to move on to trying to learn some Chinese. I'm very intimidated by Chinese because of the “four tones” and the scary number of definitions to the same word, depending on which tone is used. I figure, though, that if all I'm trying to do is learn enough of the verbal language to run around Beijing or Shanghai alone for a few days, I should be able to knock that out by the end of the month. That's the plan at least. *gulp*
Posted by Hooeyspewer at 6:15 PM 1 comment: