What What in Her Butt?

Disclaimer : Way more information than anyone needs to know - but I feel compelled to write about this anyway. Read at your own risk.

Tomorrow morning, our dog, Sam, is going to be taken to our family veterinarian in Chicago and will undergo a procedure that requires full sedation. Those of you who follow me on Twitter may have already gathered that she has somehow grown an abscess that is a little smaller than a golf ball but was totally undetected by us, my in-laws, our vet in Massachusetts and our vet in Illinois until yesterday. As Sam is a 9.5 pound miniature dachshund and gets carried around a lot, it seems inconceivable that she could grow an abscess that size and nobody would detect it. What I didn't mention on Twitter is what kind of an abscess Samantha has: She has an abscess of her anal gland. 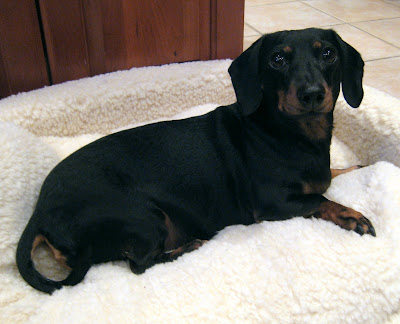 Yes, I know - ew. Dogs have two anal glands and they are located at about 4 and 8 o'clock around their anus. They are scent glands and some animals, like skunks, can empty these glands at will. Domesticated dogs cannot do this and the glands are usually emptied when the dog defecates. Some dogs have a problem emptying these glands. Some believe that dogs that eat cheaper food that does not have much fiber and causes soft stools are more prone to issues with these glands as their stools are not hard enough to push the liquid out of the glands during defecation. This isn't Sam's issue - She eats Prescription Diet w/d, which is a high fiber dog food. We're not really sure why she had an issue emptying this gland in the first place. What we do know is that somewhere along the way, she was unable to empty one of these glands and it got infected. Then it became abscessed to the point where she did not want to walk. How nobody noticed this while it was forming is baffling.

A lot of friends joke that if they were to die, they'd want to come back as our dog. To say she has a pretty good life relative to most dogs is a bit of an understatement. She gets a lot of attention and is usually glued to a member of the family on the couch or in bed. She gets bathed regularly, sees her vet for the smallest of things and even gets her butt wiped off with an unscented baby wipe after every single one of her walks. So how did nobody notice that she was forming an abscess on her bottom?

She was at her vet in Massachusetts as recently as February and had a full physical in January. She saw the vet in Chicago a couple of weeks ago to have her paw checked for a possible sprain. Maybe if I had thought to mention her scooting on the carpet a couple of times to the vet, she wouldn't have an abscess now and the vet could have drained the gland before anything too horrible happened. Ugh.

So tomorrow, Sam will have this abscess removed. Hopefully, all will go well and she won't experience any side-effects or have any complications from the surgery. Some dogs lose bowel control for a bit after the surgery - doesn't sound like a good time for those dogs. Poor pup is going to have a sore rear for a while.

My husband and I get to worry about her from Massachusetts, sadly. I'm scheduled to bring her back home to Massachusetts from her vacation at my in-laws' new place in Chicago next week. When she gets back here, we'll have to sort out the logistics for the knee and preventive back surgeries that she's going to be needing soon as well.

On a lighter note, I guess it's only appropriate that this bit from the April 2 “South Park” is still stuck in my head and has replaced "I'm Still Alive" as my current source of earworm torture:

MONDAY UPDATE: Sam's procedure went very well today. She handled the general anesthesia well and the vet said that everything went as planned. The procedure didn't even require a single stitch - so that's a really good thing. When she saw my in-laws in the vet's waiting room in the afternoon, she got really excited, greeted them with her usual face licks and wagged her tail quite a bit. She's been sleeping a lot since they got her home. She's clearly still a tad loopy from the drugs, but she's looking much more comfortable than she did before the procedure. The vet said her rear will be sore for a few days. Thanks to all of you who gave us your support and good wishes. We really appreciate it all and are very glad to be able to say that Sam is resting well tonight.
Posted by Hooeyspewer at 4:56 PM

Poor Sam! One of our pups has the same gland problem, but thankfully it has never became abscessed. Unfortunately she scoots around the carpet all the time. Good luck for Sam!

Poor Sam!! I'm so glad they found the problem, though. I'm so sorry you're having to go through this. I know it's hard to not worry, so I won't say it. Just know my *doggy prayers* and love are with you.

So sad about Sam! I got her a little something today to cheer her up!