It’s been six months since I posted last about signing up with CatalogChoice and canceling every catalog that I had in the house at the time. Originally, I canceled 28 catalogs. The total number of catalogs that I tried to discontinue to date is 44. How did it go? Exceedingly well, I have to say!

I open my mailbox now and I only have bills, statements and personal notes for the most part. I don't need a huge bin from the Post Office to pick up my mail for the week when I am away. It's somewhat liberating.

A few observations on the process: 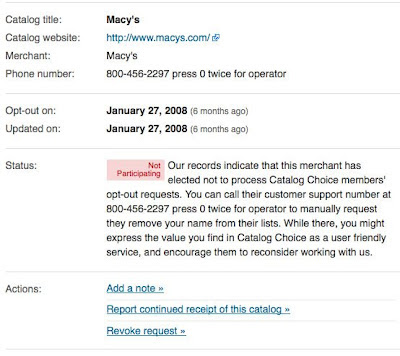 Honestly, I rarely looked at the catalogs that made it to my mailbox. I never asked for them and I really didn’t have much use for them. If I want to see something, I pull it up online. My mailbox is seriously thankful to me for lightening its load. When I initially wrote about signing up with them, they had over a half-million members and its membership had collectively opted out of over 6 million catalogs. Today, the site boasts more than 963,000 members and reports that their membership has canceled over 12,600,000 catalogs. That’s a lot of resources no longer being wasted for marketing that wasn’t working in the first place.

If you’re even the least bit interested in cutting down your catalog clutter, you should consider giving CatalogChoice a try. No regrets here.
Posted by Hooeyspewer at 7:06 PM 1 comment:

A few people have noticed that I did not post anything about my short visit to Beijing in March that was sandwiched in between Tokyo and Hong Kong. There's a definite reason for that. Sure, I posted some photos to my flickr pages but have been basically mum on the subject other than in person (when you will be sorry that it ever came up – just ask @geokitten78 and @Lora – sorry guys!) However, after hearing that a few people that I know and/or their parents are going to be making the trip there for the first time in order to attend the Olympics in a couple of weeks, I thought a few tips may be helpful.

The Hotel Card - If you are going to be traveling by taxi (and you should because it is usually cheap and quick during non-rush hours) you really need to pick up a business/translation card from your hotel concierge. It will have the hotel name as well as the names of the most visited sites in English and in Chinese as many taxi drivers (very understandably) do not understand English. A good hotel card will also have a small map on it depicting the hotel location as some drivers can’t read Chinese either (as I personally experienced). I also carried a good map of the city with me to point out locations. 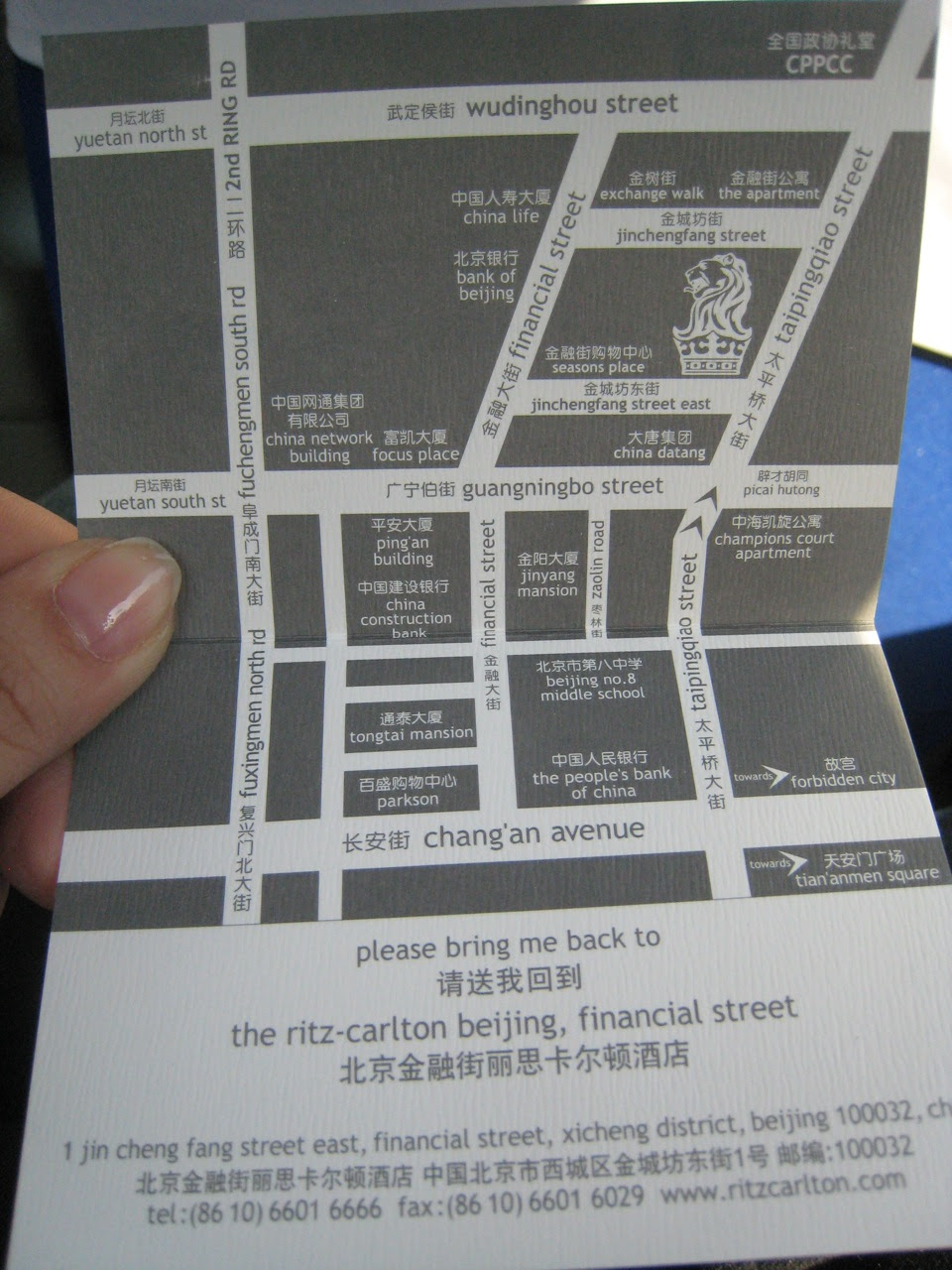 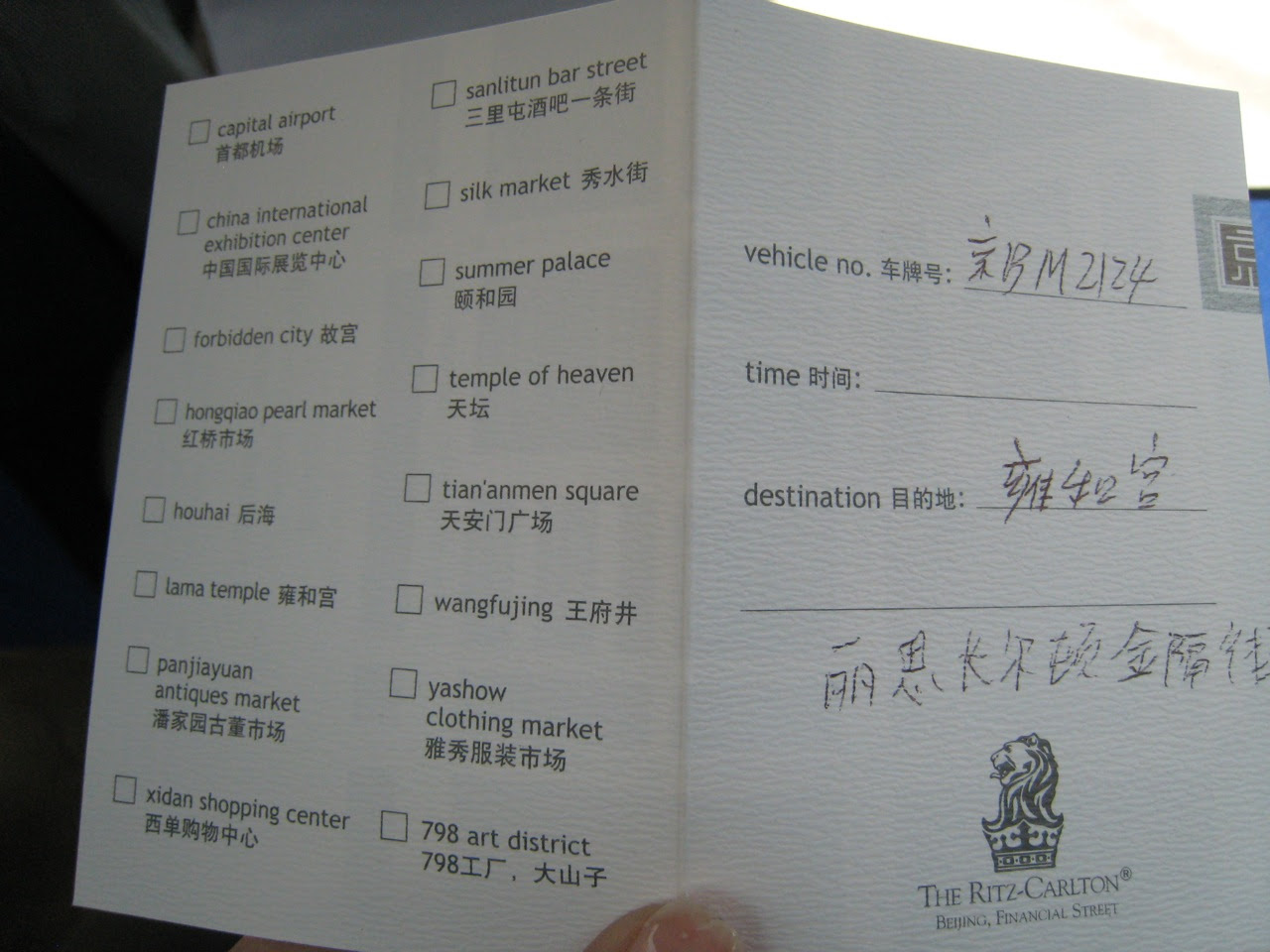 Speaking of Taxis… - Taxi meters should be used. Outside some of the more popular tourist spots, you may find that the taxi drivers ALL want to quote you a fixed price to get from point A to point B. I went down an entire queue of waiting taxis outside the Temple of Heaven compound and not one of them would use the meter to get me to Tiananmen Square. They all wanted 90 CNY for a ride that shouldn’t even be 30 CNY on a meter. Similar thing happened outside of the Forbidden City. In both cases, walking a block and waving down a passing taxi got me a ride with a meter in use. (And these weren’t the black cars you’re not supposed to use either. They were legitimate metered taxis). Granted, what’s another $10 for the convenience of a taxi right there? But I really didn’t want to get into a cab with someone who wanted to scam me. Those kinds of folks don’t deserve my business. If everyone demanded the meter be used, they would quit their little operation and just use the meters. Clearly, somebody is paying up.

Lines Can Be Optional & They Push - Don’t be surprised when people rush to the front of what looks to be a queue and talk to the attendant to pay admission, etc. Where in the U.S. the attendant will usually point to the line of other people and not wait on a line-jumper, pushing to the front seems to pay in Beijing. If you notice that this is going on in a line in which you are standing, you probably should do the same, lest you be in that line much longer than you should. Don’t be surprised when you are at the front of what should be a queue and someone rudely pushes you to get to speak to the attendant. This happened to me almost everywhere I went and most notably at Beijing International Airport while the airline representative was holding my passport and checking me in for my flight to Hong Kong. Just be patient.

Yes, They’re Really All Spitting in Public - That sound you will hear constantly? That is indeed what it sounds like. Get used to it. You'd probably do the same if you breathed their air all year long too.

I could go on – but I will stop here and just suggest that you pack your patience and a couple of candy bars for emergencies. Oh - and remember to bring "clean" computers and electronics as your data may be at risk while you are there. Let's not forget, the People's Republic of China is a Communist country. Good luck.
Posted by Hooeyspewer at 2:31 PM 1 comment:

Of All the Spots in the Garage... 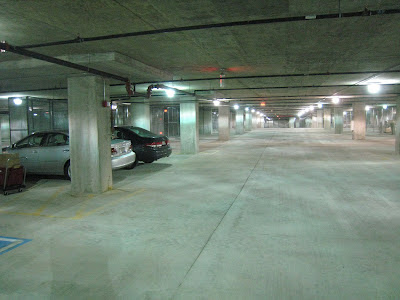 We own 2 parking spaces in this garage. Both of them are occupied in this photo. The only problem is that the black car in the photo is not ours. Like they couldn't find another place to park. Gotta love it!
Mobile post sent by Hooeyspewer using Utterz.

Replies.
Posted by Hooeyspewer at 10:55 AM No comments:

Best Gift I Ever Gave Mom - Found It!

In 2006, I wrote a post about a mug I gave my mom when I was a kid. It was sexual in nature but neither I nor my mom realized this at first. She had used it at work for a week before anyone said anything to her. Oops. Well, I found the mug while sorting through things at my Mom's house while helping her move to a new place. I can kind of see how a kid may not see the bad stuff - but I'm not sure how an adult missed it. Ha. Here it is for your perusal: 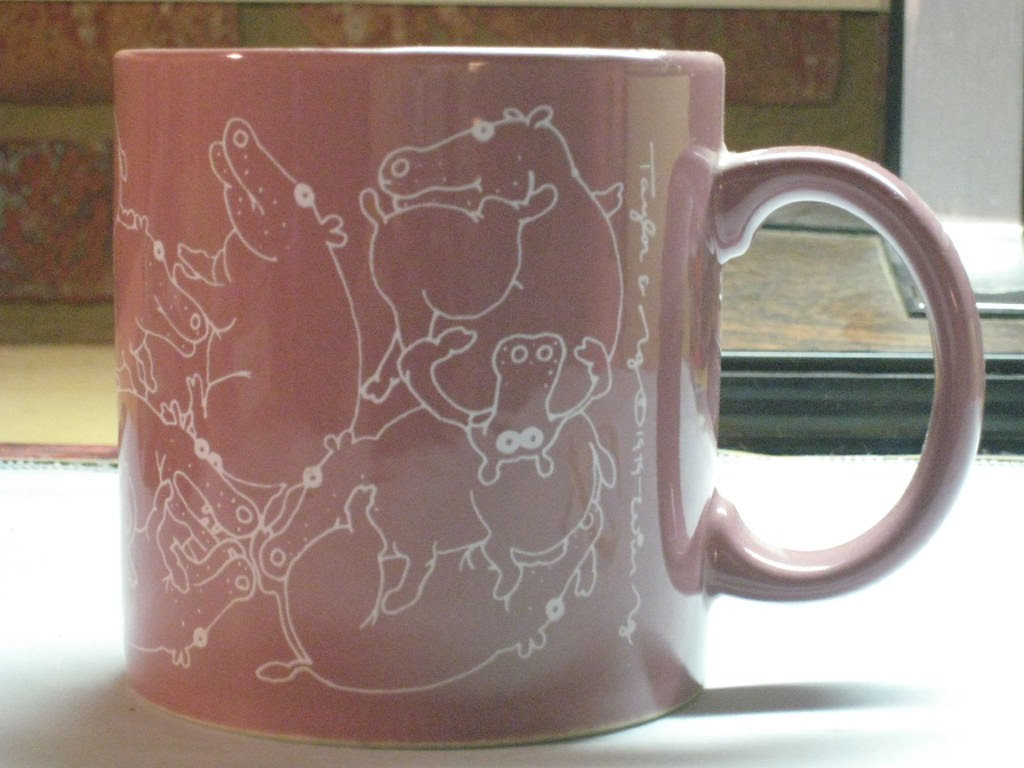 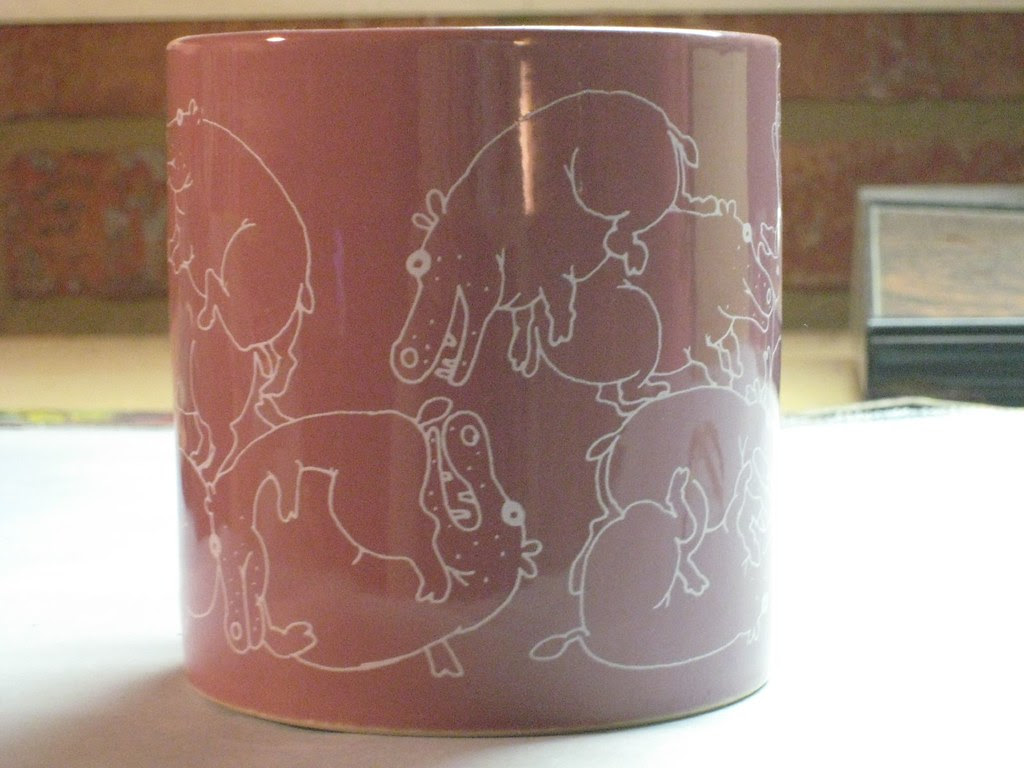 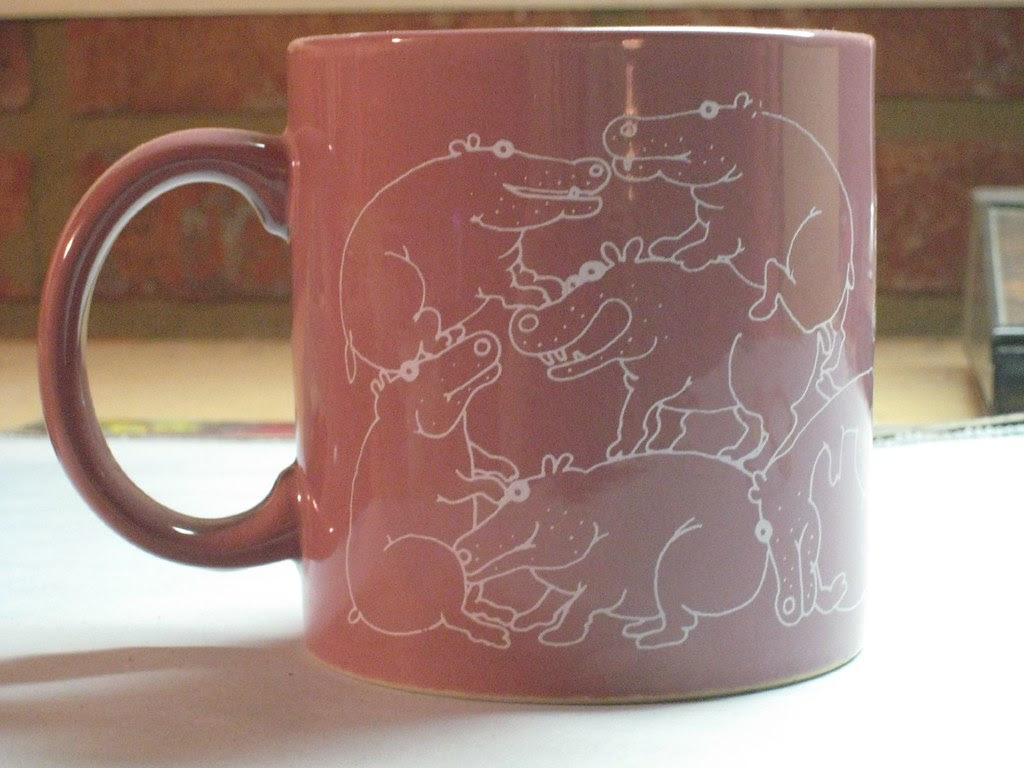