Eating My Way Through August (For Good Luck, Rub My Tummy) 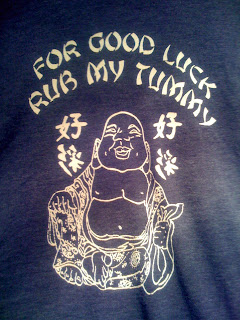 In regards to diet and exercise, my behavior in the month of August bordered on sinful gluttony. I can fully admit that in those respects, I acted somewhat recklessly. I did not deny myself any morsel that I wanted to consume on the grounds of something being unhealthy or “too much.” Clearly, as I look back on the month, the extra pounds which have appeared on my scale at home are fully explained. I’m not even a little surprised. I knew exactly what I was doing.

We weren’t home for the great majority of the month. I never seem to work out when I’m away from home. Clearly, this is sub-optimal, but it’s just the way it’s been.

I started the month by flying to Chicago to drop off our dog with my in-laws for the month. I spent time with the family while there and had the opportunity to eat some of my favorite foods that I can’t replicate in Boston (unless I have it shipped from Chicago).

The day after flying back to Boston, I flew out to Orlando, Florida for a short vacation at Disney World. My husband and I don’t have any children but we run around that resort like a couple of little kids with their allowance in their pockets. Though we did get a lot of walking under our belts there, we consumed more than enough to offset any benefit from the exercise. We ate and drank our way through the countries at Epcot’s World Showcase. We snacked on all things snackable. I’d never had a cream cheese-filled pretzel before that week when I snagged one at the Magic Kingdom (I don’t really recommend them – they’re a tad sweet). We went to Fulton’s Crab House at Downtown Disney twice – once for dinner and once for a late “snack” at the bar (that turned into an unintended additional meal). I also seemed to consume ice cream whenever possible. Thinking it was the heat…

Two days back in the office for my husband, and then we left for our vacation in Maine. I adore Maine and will miss our drives up there greatly when we move away from New England. A day was not spent in Maine on which I did not have lobster and/or fried clams during a meal. We sought out little gourmet shops for wines and cheeses to enjoy on our various balconies. Freeport, Bar Harbor, Camden, the Kennebunks – we worked our way down the coast and managed to find great food everywhere we went. Our last dinner in Maine was at the White Barn Inn, which always makes me very happy – but also very, very full. It was an appropriate end to that vacation. That was the only actual dining reservation I made during the entire month of August.

Two days back in the office for my husband and then we left to close out the month in Chicago to spend time with our family and to pick up our dog. On Friday, we even had a small family wine tasting – four people, six bottles of wine and a lot of meats and cheeses. My mother had a party for our anniversary on Saturday.

We finally returned home yesterday and I’ve decided to start behaving myself in September. No excessive eating or drinking until my body bounces back from the damage inflicted in August – and the rest of the summer, for that matter. My clothes don’t fit properly anymore and I look puffy in the mirror. It’s back to the gym and time for a shift in thinking. I’m starting to resemble the Buddha on one of my favorite t-shirts and though that may work just fine for some people, it doesn’t feel good for me. Do I regret any of the excess from the last few weeks? Not at all. You’ve got to pay to play. Time to pay up. It was worth it.

Some of the Folks Who Fed Me in August: